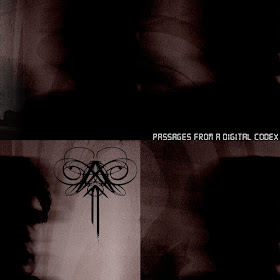 I find myself locked in a closed lid dumpster. I'm entrenched in a thick, acrid gravy that comes up to just below my knees. The horse flies, with their abounding numbers, have usurped my resolve.  I've lost all hope as I have been in here for a week and the swill in which I am standing is the liquefied remains of my friends and family. 'Passages From A Digital Codex', the latest offering from Australian experimental artist Angellis Taliuu, would be the ideal soundtrack to this Cronenbergian body-horror affair I've found myself in.

This EP length release, with it's synth heavy sonic palette, hearkens back to the soundtrack work of the horror films of yesteryear. Although this release is firmly in the ambient category, each track has its own legs to stand on.  Track 1 is a descent into a whirlwind of resonant synth swells and insect-like chirping that progresses into a fierce punishment of slow, rhythmic white noise. The second entry has all the aesthetics of a weekend in Freddy Krueger's boiler room while the third track is a patiently rolling wave of haunting orchestral strings.

I found myself enjoying this release with the only complaint being that I wished some of the tracks could have been longer.  The tracks move in a manner that would suggest that something is coming, but instead fade out to silence.  That is a minor gripe for an otherwise solid release of ambient work.